... the best cure for the common cold

So I've had this stupid cold for nearly two weeks now.  The doctor, of course, couldn't do anything for me since it's just a virus so I decided to take the matter into my own hands.  With the help of Dad's Chicken Noodle Soup (and a few otc's) I'm on the road to recovery! 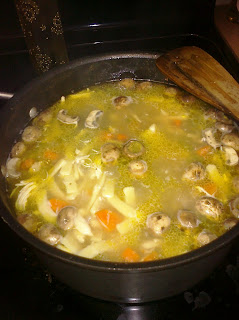 I'm a little torn on whether to give this family recipe or not, but why not share the love, right?  And this is even more special... in the way only my Dad can do, here's his recipe for...

Put two quarts of water in a four-quart soup pot and bring to a brisk boil.  While the water is heating up, add one whole white onion, chopped course, six celery stalks chopped to your liking, two bay leaves, and salt and course ground pepper to taste.  (I usually use about a teaspoon of salt and a half-teaspoon of pepper.)  Extras you could add at this point include a carrot, sliced thinly, or chopped coarsely, for a little extra color and flavor.  Same way with adding a half-cup or so of frozen peas.

While the water is coming to a boil, take a whole chicken and rinse well.  Be sure to take the giblets out of the body cavity.  Sometimes they're in a paper bag, sometimes they're just in there.  I usually just rinse them well and toss them in the pot and cook them along with the chicken for flavor.  This is your option.

When the water is boiling briskly, put the whole chicken in the pot.  Partially cover, and cook for about thirty minutes, or until the chicken is very tender.  (Check it with a kitchen fork.)  Remove the whole chicken and the giblets from the pot, and reduce the heat to a very slow boil.  Let the chicken cool to a point that you can handle it without burning your little fing-fings.  Then de-bone the chicken.  You can either 'jerk' the chicken (tear it into strips and pieces), or you can use a knife to cut it into pieces the size you want.  Put the chicken (and chopped giblets, if you want) back in the pot.  You can adjust the amount of soup you want at this point by adding extra water.  Bring back to a very slow boil.  Extras you can add at this point are some mushrooms, whole or sliced, depending on their size, just to add some tasty little morsels.

Add noodles.  You can use any kind of noodle or pasta you want to.  I like the medium wavy noodles by American Beauty, or the homemade egg noodles that you can find in the freezer section.  After adding the noodles, cook the soup for at least another thirty minutes, but not more than an hour.  If you cook the soup too long, the noodles will get mushy and fall apart.  So, best to cook until the noodles are done, then remove from heat and serve.  Or, like chili, this soup gets better after refrigerating overnight, and reheating the next day.

Taylor's Notes:
Thank goodness Tyson prepares their chickens now so that you can buy them without the neck and giblets!  I've had to pull the neck and giblets out of a chicken once and let me just say that I hope to never do it again.  Other than that, I pretty much follow this recipe exactly... except the peas, I leave out the peas.  I use Reames egg noodles from the freezer section because they just give it that more "homemade" feel.  And you know what... my cold is gone.