When I saw these guys in my latest Real Simple magazine, I knew I'd be making them soon.  I'd always heard that popovers were difficult to make, but these looked simple.  Hey, they came out of Real Simple and they even have the word 'easy' in the name.  How could I resist giving them a shot?

Sure, they don't look exactly like the picture in the magazine, but they were tasty and easy.  And, hey, I can work on the aesthetic.  If you enjoy bread as much as me, give these a try! 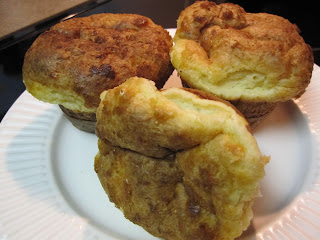 Heat oven to 400 degrees.  Brush the cups of a 12-cup nonstick muffin tin with butter.

In a large bowl, whisk together the flour, milk, eggs, butter, and salt until only a few lumps remain (do not overmix).

Divide the batter among the prepared muffin cups and bake until puffed and a deep golden brown, 30 to 35 minutes.  (Do no open oven door before 30 minutes or the popovers will collapse.  Remove 1 popover to check that the underside is browned.)  Serve immediately.

Taylor's Notes:
As I said, these were really easy to make.  My only problem was that they stuck to the pan a bit when I tried to take them out.  Next time, I will definitely grease the pan more... maybe brushing it with melted butter would be better than trying to smear cold butter on the pan?  :)

Posted by taylor at 8:19 PM No comments:

Email ThisBlogThis!Share to TwitterShare to FacebookShare to Pinterest
Labels: bread

After all that eating over the last long weekend, I decided that soup would probably be a good idea for dinner. A hearty soup because, you know, after eating as much as you do over Thanksgiving, your stomach seems to think you're hungry every thirty minutes.  This one, though, this one is a light hearty soup.  Win win. 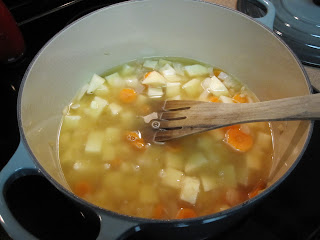 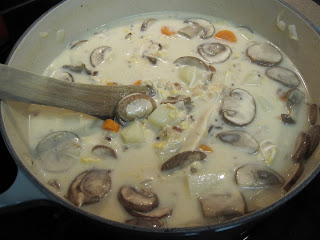 ... but it is, and it's delicious!  Now, I don't know that the same could be said for the popover and wine (light, no; delicious, yes), but hey, it evens out, right? 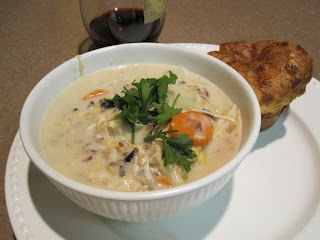 Cook rice according to package directions, omitting salt and fat.

Taylor's Notes:
A few tweaks to this one... to begin with, I used shredded 2% mild cheddar and shredded 2% sharp cheddar instead of the Velvetta.  It didn't melt as well as the Velvetta probably would have, but it's also not overly processed goop.  Another switcheroo I made was to use rotisserie chicken instead of the chicken breasts.  I removed the skin, of course, and only used the white meat from the breast.


I also added mushrooms and carrots to the mix for a little extra color and flavor.  I put the carrots in with the potatoes and then added the mushrooms after the milk mixture had thickened.  After I added the cheese, I let the soup simmer for a while until the mushrooms were tender and then served it with a little parsley on top, which added a great, bright fresh flavor to the soup.

What's Thanksgiving without cranberry relish?  Ok, to be honest, I'm not sure that we've ever actually had cranberry relish at our Thanksgiving dinner, but the tradition of it always makes it seem nice.  And, no, I'm definitely not talking about that stuff from the can.  (my apologies if that's your thing...)  So this year I set out to find a tastier version and, thankfully, I did just that. 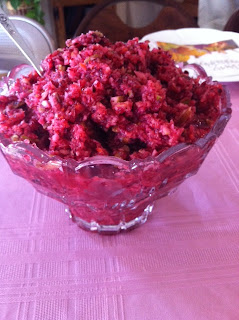 Wash and dry the orange.  Cut the orange into small wedges, including the peel, and put in a food processor.  Add the cranberries, pear, sugar, and salt.  Pulse until coarsely chopped.  Transfer to a bowl, cover, and refrigerate for at least 2 hours and up to 2 days.  Just before serving, stir in the pecans.

Taylor's Notes:
First things first... this makes a lot.  I'm not sure how much a serving technically is, but I doubled the recipe for our Thanksgiving gathering of 25 people and I bet we took down one-quarter of the relish.  Not that it wasn't good, it was!, but most people just don't need that much cranberry relish.


I've had leftovers a couple of times and am freezing the rest for Christmas dinner.  I'll let you know how it turns out!

How could I possibly not make these cookies after reading the name of them?  Peanut Butter... Nutella... Cookies... how could anything be bad about that?  Well, let me tell you... nothing, that's what.  Absolutely nothing. 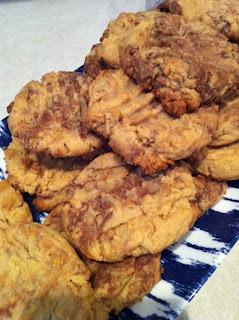 Are you on Pinterest?  If you aren't, save yourself.  If you are, I'm guessing you're as addicted as I am.  I've made a few things that I stumbled across on that site, but this by far takes the cake cookie.

Add flour, baking soda, and salt.  Drizzle Nutella on top of the dough, then swirl it through the dough with a butter knife.

Chill dough 15 minutes in the refrigerator.  Roll into balls by hand.  Place on parchment lined cookie sheet.  Using a fork, press down the balls to flatten slightly.  Bake until edges are very lightly browned (about 7 to 10 minutes).

Taylor's Notes:
The only thing, and I mean the only thing, I would change about this recipe would be to add more Nutella.   Not a lot more, maybe 1/3 cup total, but I would definitely add more.  I mean, really, how can you have too much Nutella?

Posted by taylor at 6:59 PM No comments: