This recipe is so easy to whip up - perfect for a holiday gift, to take to a NYE party, or, I'm thinking, even a Super Bowl party, Game Night, whatever.  Who doesn't love a bowl of nuts for snacking?? 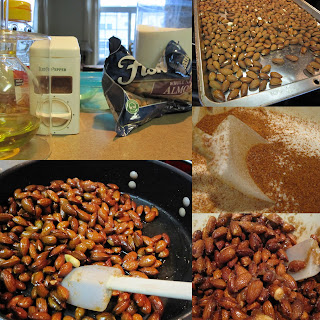 Most likely, you'll have most of the ingredients in your kitchen and since it takes less than 20 minutes from start to finish, I think you'll love recipes from Everyday Food just like I do. 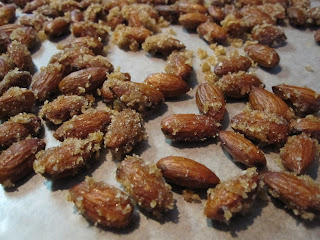 Sweet and Spicy Almonds
2 1/2 cups unblanched almonds
1/4 cup sugar
1 1/2 teaspoons coarse salt
1 teaspoon cayenne pepper
1 tablespoon honey
1 tablespoon water
1 teaspoon olive oil
Preheat oven to 350 degrees.  Spread almonds on a rimmed baking sheet; toast until fragrant, about 10 minutes.  In a large bowl, combine sugar, salt and cayenne pepper.
In a large skillet, over medium heat, cook honey and water with olive oil, stirring, until combined, 1 minute.  Add almonds; toss to coat.
Transfer nuts to sugar mixture (do not scrape extra glaze into bowl); toss to coat.  Cool in a single layer.
Taylor's Notes:
I just use a full 1 lb bag of almonds.  It's about 3 cups so I just adjust the other ingredients accordingly - like a heaping 1/4 cup of sugar instead of a level one.  Definitely be sure to not scrape the extra glaze from the skillet into the sugar mixture.  It makes a mess and the almonds don't come out looking like they do above (trust me).  They do taste as good, but they're not as pretty.  And who doesn't want pretty almonds??
Enjoy!
Posted by taylor at 9:10 AM 2 comments:

You know, sometimes you come across a recipe that makes you say "Ohhhh yeahhhhh."  Well, here was mine for the year.  Thanks to Cooking Light for presenting me with my recipe of 2009... too bad I didn't come across it until November.  Or maybe not so bad (where my hips are concerned!)  Regardless, I think I'll be making this one for years to come.  Especially around the holidays.  Toasted nuts, hazelnut-chocolate spread, pastry... it just screams "holiday", doesn't it? 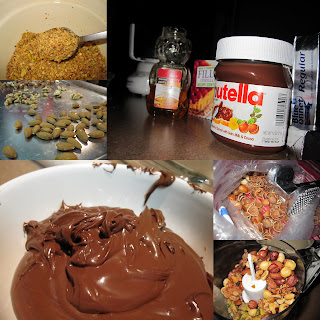 The recipe is actually pretty simple if you're patient enough to take the time (about an hour to assemble) and to clean up the mess (totally worth it).  And, unless you can find hazelnuts out of the shell, it's a great stress reliever to bang the heck out of those shells.  My tool of choice: a meat tenderizer. 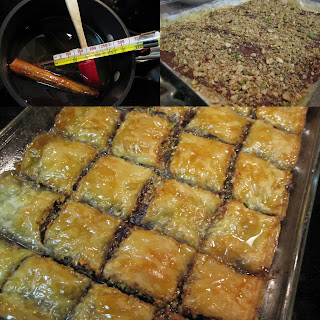 Above is a shot of the baklava right out of the oven after I poured the honey / cinnamon  mixture on top.  So golden and shiny!  Below is a shot of them plated.  Look at that nutty, hazelnut-chocolaty goodness!! 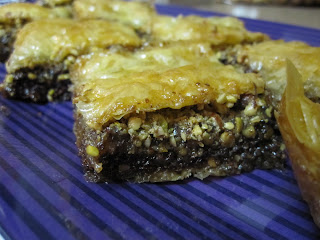 Make 3 lengthwise cuts and 5 crosswise cuts to form 24 portions using a sharp knife.  Bake at 350 degrees for 35 minutes or until phyllo is golden.  Remove from oven.  Drizzle honey mixture over baklava.  Cool in pan on a wire rack.  Cover; store at room temperature.

Taylor's Notes:
First off, don't make the honey / water / cinnamon mixture until the baklava is about halfway done baking.  How on earth are you supposed to make that, remove it from the heat and keep it warm while you're assembling the baklava and letting it bake for 35 minutes?!?  Secondly, definitely use butter.  I used margarine both times I made this and it just turns into a watery consistency when it's melted.  It still tastes good - no doubt about that! - but I think I'll use butter next time.  Also,  unless you want to be wasteful like I was, find another use for the remaining phyllo dough.  There's probably 20 sheets left out of the box after you finish this recipe.