This time, with a perfect Sunday evening meal.  A perfect Sunday evening meal when you've had a full Sunday of bike riding, brunching, admiring art (finally saw the Picasso exhibit at the Nelson Atkins museum... FOUR weeks before it leaves!), errand running and a little pampering for the pigs... it's nearly Spring in KC, gotta get those toes ready for sandal season!  So with all that, an easy, quick, and delicious recipe was just what we needed.

So I give to you, Mushroom Stroganoff.  I'm actually not sure if I've even had the more well-known Beef Stroganoff.  My husband makes Hungarian Goulash, but it's more tomato-based, not cream-based, and probably isn't even anything like Beef Stroganoff.  Who knows?  Probably you.  Not me.  But what I do know is that I. Love. Mushrooms.  So when I saw this recipe posted by Gimme Some Oven, it was immediately added to "the list."

And why not?  You start with onions and cook them down until they're soft and browned and you know it's a good thing that you're eating them with your husband because if there's any talking or kissing going on the rest of the night, at least you've eaten the same thing.  C'mon, don't tell me you don't think about that. 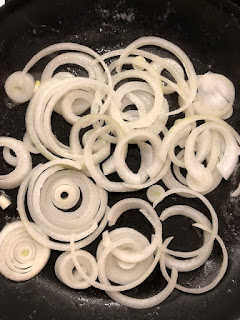 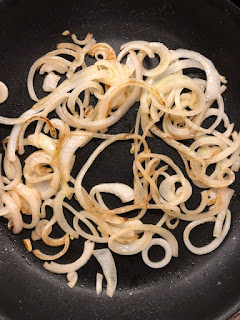 Then you add in mushrooms and garlic (and with FOUR (see, it's a thing!) cloves of garlic the same rules apply with the talking and the kissing) and you watch those babies cook down and the smells that are coming from the pan are earthy and lovely and you really just want to stop there and grab a fork, but you know what's coming next will be so good. 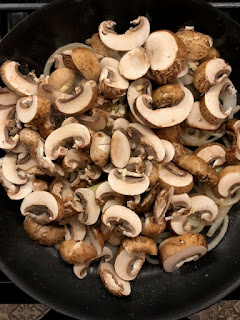 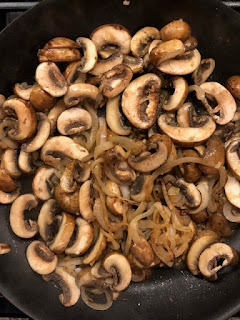 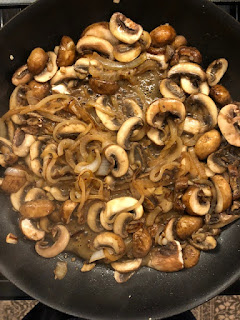 And before you know it, you've created this delicious hearty sauce, of sorts, that goes over egg noodles.  And aren't egg noodles just comfort food in and of themselves?  I can remember, as a kid,  when I used to just add butter to them because I didn't like tomato sauce or probably even mushrooms (what was wrong with me?!?!), but they were So. Good.  And then you grate fresh Parmesan cheese over the top and pour yourself a glass of red and settle in to enjoy the last few hours of the weekend. 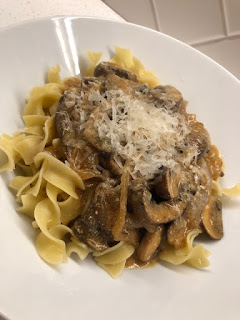 Cheers to you... and comfort food... and Sunday evenings.  And please check out Gimme Some Oven's pictures, because they're WAY better than those above.

Cook egg noodles al dente in boiling, generously salted water according to package instructions.  (For optimal timing, Ali recommended (and I agree) actually adding the egg noodles to the boiling water at the same time that the vegetable stock is added to the stroganoff.)

Melt 1 tablespoon butter in a large saute pan over medium-high heat.  Add onions and saute for 5 minutes, stirring occasionally.  Add the remaining 2 tablespoons butter, garlic, and mushrooms, and stir to combine.  Continue sauteing for an additional 5-7 minutes, until the mushrooms are cooked and tender.  Add the white wine and de-glaze the pan by using a wooden spoon to scrape the brown bits off the bottom of the pan.  Let the sauce simmer for 3 minutes.

Meanwhile, in a separate bowl, whisk together the vegetable stock, Worcestershire, and flour until smooth.  Pour the vegetable stock mixture into the pan, along with the thyme, and stir to combine.  Let the mixture simmer for an additional 5 minutes, stirring occasionally, until slightly thickened.  Then, stir in the Greek yogurt (or sour cream) evenly into the sauce.  Taste, and season with a generous pinch or two of salt and pepper as needed.

Serve immediately over the egg noodles, garnished with your desired topping.

Taylor's Notes:
I didn't actually have any brown bits to scrape when I added the dry white wine.  There was quite a bit of liquid from the onions and mushrooms that didn't really allow for that.  Although the brown bits are always delicious, I don't think it was that big of a deal.  I also had a little issue with my Greek yogurt in that I think I should have added it a little at a time, really stirring it into the mushroom mixture.  Again, not a big deal, but it didn't look as creamy as Ali's did.

As always, I think this type of recipe just gets better with time, so next time (and there will be a next time, for sure) I may make the stroganoff and let it either sit and simmer for a while longer or make it a day in advance and then warm it on the stove before we're ready to eat it.  It's the same thing as with soups, stews, Hungarian Goulash... it always gets better when the flavors have time to mingle.