Summer has officially arrived (well, let's be honest, it arrived before it was actually 'official').  Although I try to watch what I eat most of the year, there's something about swimsuit season that really brings it home.  I refuse to give up desserts, though, no matter what time of year it is.  This one may not be entirely healthy, but it's certainly not completely guilt-inducing. 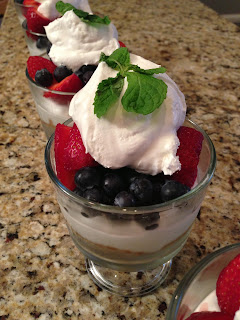 Berry Parfait
serves 6 (individual) or 12 (in one pan)

Combine all ingredients in a mixing bowl and mix well.  Press firmly in a 9"x13" baking dish (or individual parfait cups) and bake for 8 minutes at 350 degrees.  Cool.

Beat cream cheese with sugar and milk until smooth; fold in Cool Whip.

Spread filling mixture over graham cracker crust.  Top with berries.  Add a dollop of plain Cool Whip and a sprig of mint as garnish.

Taylor's Notes:
I've mentioned Pinterest a time or two, yes?  This recipe is an adaptation of one I  pinned.  I've linked the original recipe there, but I left out the vanilla pudding aspect of that recipe.  To me, it seemed like a little too much and I chose to make the berries shine rather than have them coated with pudding.  To pudding or not to pudding... that is your choice.