... Potato Frittata with Feta and Scallions

I realize I've been a little M.I.A. lately.  It's partially because I've just moved (if 7 months ago qualifies) and I've been busy with updating the house, getting settled, and waiting for my new dining room furniture to arrive.  Now that it has (hip hip hooray!!), I've been enjoying entertaining friends and family.  Today I got to host my dad, brother-in-law, nephew, and Grandma and Dale.  As breakfast / brunch is one of my most favorite meals, I'd say this might turn into a bit of a ritual. 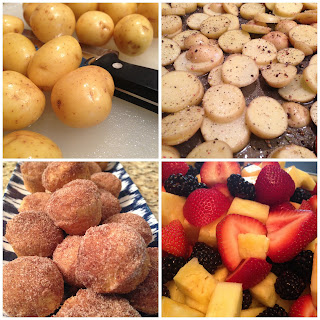 Somewhat traditional breakfast ingredients - potatoes, eggs, bacon - are taken up a notch in a delicious frittata.  While the potatoes are roasting, take a few extra minutes to add Cinnamon Brown Butter Puffs and fresh fruit to the menu. 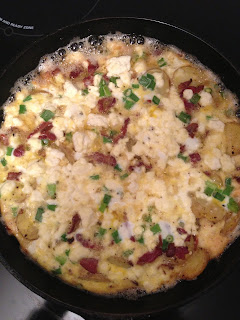 I don't mean to brag, but check out that frittata!  It was pretty darn tasty, but I'm convinced that what made it so good was the skillet.  I was lucky enough to get to use my Grandpa Jack's cast iron skillet (thanks for the loan, Dad!).  Whether you have a well-seasoned, well-loved skillet or a new one, I have no doubt your frittata will be a success, too.

Preheat oven to 400 degrees.  Coat a roasting pan or baking tray generously with oil, about 1 to 2 tablespoons.  Peel potatoes, and cut them into 1/4" - 1/2" slices, then halve them lengthwise into half-circle shapes.  Pile them in the prepared pan, and generously season with salt and freshly ground pepper.  Don't worry if they don't fall into one layer - the combo of some steamy / softer and some crisp-edged potatoes will work great in this dish.  Roast 30 minutes, or until potatoes are mostly cooked (they'll finish cooking with the eggs), tossing once halfway through.  Let cool slightly.

Cook bacon in well-seasoned 9" cast iron frying pan until crisp.  Scoop out with slotted spoon and drain on paper towels.  Add additional tablespoon oil to the bacon drippings in the pan, and reheat it over medium heat.  Swirl the oil and drippings around in the pan and up the sides, being sure to coat it fully.

Arrange roasted potatoes in your skillet.  If there are pieces with browned undersides, flip the toasty sides up.  Scatter bacon, then scallions and feta over potatoes.  Whisk eggs with milk, 1/2 teaspoon salt, and several grinds of black pepper in a medium bowl, and pour over potatoes.  Cover skillet with foil and bake 20 minutes.  Remove foil, and bake another 10 to 15 minutes or until puffed at the edges and set in center.

Serve right from the skillet in 6 to 8 wedges.

Taylor's Notes:
This is another winner from Smitten Kitchen.  It doesn't look like Deb has posted it on her website, but it's in her cookbook.  Buy it if you haven't already - you won't regret it.

I used small gold potatoes rather than the Yukon Gold, solely because my grocery store only offered a 5-pound bag of Yukon Golds and one girl just doesn't need that many potatoes.  I reduced the roasting time of the potatoes by 5 minutes, but other than that I followed the recipe.  And really, when it comes to recipes that come out of the Smitten Kitchen, that's exactly what you should do.

Email ThisBlogThis!Share to TwitterShare to FacebookShare to Pinterest
Labels: breakfast